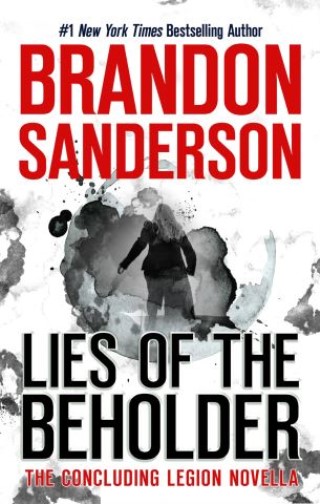 Legion: Lies of the Beholder

The shocking conclusion to Brandon Sanderson's Legion novella series, on its own for the first time.

Stephen Leeds is perfectly sane. It’s his hallucinations who are mad.

A genius of unrivaled aptitude, Stephen can learn any new skill, vocation, or art in a matter of hours. However, to contain all of this, his mind creates hallucinatory people—Stephen calls them aspects—to hold and manifest the information. Wherever he goes, he is joined by a team of imaginary experts to give advice, interpretation, and explanation. He uses them to solve problems . . . for a price.

When Stephen gets an unexpected cry for help from the woman who taught him how to control his aspects—right when one of his aspects suddenly and violently disappears—it will send him on a case the likes of which he could never have imagined.

At the Publisher's request, this title is being sold without Digital Rights Management Software (DRM) applied.

Brandon Sanderson: Brandon Sanderson grew up in Lincoln, Nebraska. He lives in Utah with his wife and children and teaches creative writing at Brigham Young University. He is the author of such bestsellers as the Mistborn® trilogy and its sequels, The Alloy of Law, Shadows of Self, and The Bands of Mourning; the Stormlight Archive novels The Way of Kingsand Words of Radiance; and other novels, including The Rithmatist and Steelheart. In 2013, he won a Hugo Award for Best Novella for The Emperor's Soul, set in the world of his acclaimed first novel, Elantris. Additionally, he was chosen to complete Robert Jordan's Wheel of Time® sequence.