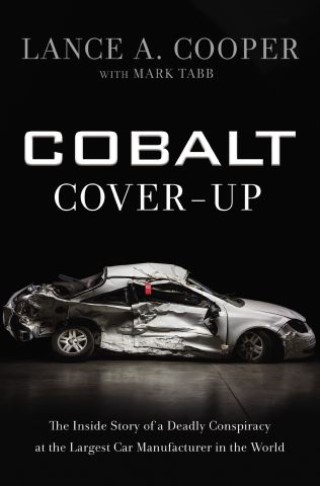 Following a deadly car crash, small-town lawyer Lance Cooper risked everything to battle one of the most powerful auto corporations in the world to get justice for a young woman. A fast-paced, journalistic account of tragedy turned to triumph, despair to hope, Cobalt Cover-Up is an inspirational, thoroughly compelling, and victorious read.

In the midst of his own family struggles, small-town Georgia lawyer Lance Cooper agreed to defend Ken and Beth Melton and investigate the deadly accident that killed their daughter Brooke after she inexplicably lost control of her Chevy Cobalt. But what started as a heartbreaking yet all too common lawsuit quickly escalated into a David vs. Goliath case when Cooper discovered shocking evidence that General Motors concealed an ignition switch defect for nearly a decade--resulting in 124 deaths, including Brooke's, and risking the lives of millions more. ­­

Despite GM's settlement offers and attempts to bury evidence, Cooper refused to back down and worked tirelessly to expose the truth. Locked in a tenacious legal fight, Cooper and the Meltons faced incredible odds--Ken and Beth losing jobs and suffering the difficulty of grieving a beloved daughter during a court battle, Cooper risking his reputation and private practice against the overwhelming opposition from GM's team of lawyers, and both parties facing massive financial strain. Yet, in the relentless pursuit for justice and to protect future innocent lives, this small-town lawyer and a working-class American couple stared down the biggest US auto manufacturing mogul and ultimately transformed the entire industry.

Lance Cooper is founding partner of The Cooper Firm, specializing in product liability cases against the auto industry. Cooper received his law degree from Emory University and has served as lead counsel in trials against several auto manufacturers including General Motors. He and his wife, Sonja, live in Georgia and are proud parents of five children.

Mark Tabb has authored or coauthored more than thirty books, including the number one New York Times bestseller, Mistaken Identity.