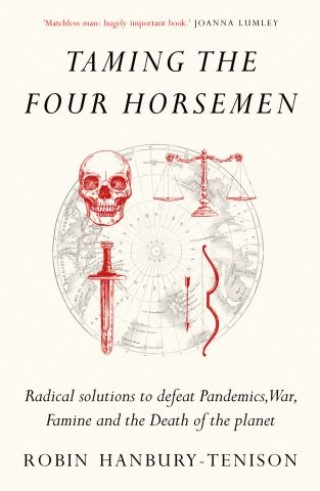 A powerful polemic on the major threats facing the world today and how they can be overcome.

Our world is facing catastrophes of many kinds, from the climate crisis to global outbreaks of deadly diseases. But could we look back at the collapse of previous civilisations to see what lessons might be learned?

The explorer and campaigner Robin Hanbury-Tenison believes we urgently need to tackle the four harbingers of catastrophe:

The White Horse of Pestilence and Pandemics – many remote tribal societies have lives that are healthier than ours – what can we learn from them?

The Red Horse of War – can we avoid conflict through promoting prosperity and renewable energy for all?

The Black Horse of Famine – is now the time to use technology we’ve had since World War II to influence the weather?

The Pale Horse of Death – will geoengineering help to undo the appalling pollution we are inflicting on the planet, especially the oceans?

The lessons of Taming The Four Horsesmen are clear: if we humans are to survive we need to make transformative changes now.