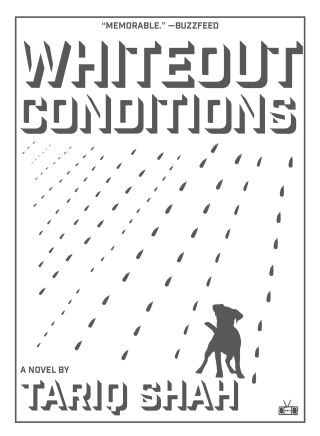 "The condition of Whiteout Conditions is the North American sublime, a grim, gnomic, hilarious dialect Tariq Shah inherits from Denis Johnson, Don DeLillo, the Coen Brothers, The Jesus Lizard, and Colson Whitehead. —Jess Row, author of Your Face in Mine and White Flights
Ant is back in Chicago for a funeral, and he typically enjoys funerals. Since most of his family has passed away, he finds himself attracted to their endearing qualities: the hyperbolic language, the stoner altar boy, seeing friends in suits for the first time. That is, until the tragic death of Ray — Ant’s childhood friend, Vince's teenage cousin. Ray was the younger third-wheel that Ant and Vince were stuck babysitting while in high school, and his sudden death makes national news.

In the depths of a brutal Midwest winter, Ant rides with Vince through the falling snow to Ray’s funeral, an event that has been accruing a sense of consequence. With a poet’s sensibility, Shah navigates the murky responsibilities of adulthood, grief, toxic masculinity, and the tragedy of revenge in this haunting Midwestern noir.